This week, Energion Publications is releasing Parent-Driven Discipleship by Michael Kennedy. Dr. Kennedy is a father of two children and a pastor. He wrote this book from a heart that is concerned and passionate about the young adults, youth & children of this world. He believes it is the parents who are the frontline teachers.

While we would like to throw stones from a safe distance at the culture’s attempt to distort the traditional family, the Church has become guilty of the same crime but with different weapons. Instead of murdering the sacred institution of marriage, we have, in many ways, abdicated our responsibilities as parents by spiritually abandoning our children. We have in essence converted the church into a spiritual orphanage where we enlist other people to spiritually raise our children. – Michael Kennedy

Whatever we, as a Judeo-Christian community, have been doing, it isn’t working. The usual pizza/lock-in youth ministries can easily be quantified in attendance as it is more about food and fun than answering questions and building a young adult’s spiritual health. What if we instead began to look at a ministry in which we count how many former “youths” are still in church and ministering in the church through college and their 20’s?

Parent-Driven Discipleship is an $11.99 (or buy 2 and get 1 free in Energion’s current curriculum sale) investment. If you are a parent, grandparent, teacher, pastor or someone concerned about the Church and how we impact (or don’t!) children, take a few minutes and look at Michael Kennedy’s new book.

Energion author Steve Kindle will be offering a webinar on apocalyptic theology on October 17, 2019. You can get detailed information on this webinar at FaithontheEdge.org.

Matt received his advance copy of The Jesus Paradigm, and reviews it on his blog at Broadcast Depth. 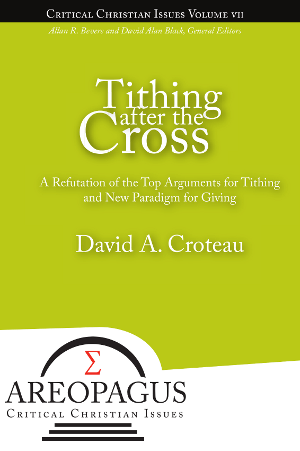 For those who don’t get stirred up about some of the other major issues, surely tithing will get the juices flowing. Thus we announce Tithing after the Cross, the seventh volume in the Areopagus Critical Christian Issues series. It’s at the printer. You can still pre-order it directly from us at a 30% discount until…

Energion Publications is pleased to announce the upcoming release of Christian Archy, the first booklet in the new Areopagus Critical Christian Issues Series. This series of booklets is designed to address critical and controversial issues in Christianity and will be jointly edited by Dr. David Alan Black and Dr. Allan R. Bevere. For more information…

A couple of people have asked me about the way we do releases at Energion Publications.  The public image of a book release has the publisher getting in a stock of the books, shipping them out to various bookstores, and then, on the date selected, allowing these bookstores to make the books available.  In that…